Blourbon, Miami Vice, and I ate at Shooney’s all you can eat buffet, hung out in the Grand Prix Motel then ate at an all you can eat breakfast in the morning. 2 all you can eats are 2 too much under normal times but these are not normal times.  Steve the Christian owner of the motel really let us down arranging for a ride back to the trail so it wasn’t until 11 that we got a shuttle. Our driver was as always a hiker, a nice guy, and a bit of a bohemian. Long silver pony tail, itinerate carpenter but knowlegable about the mountain. Once Bloubon and I hit the trail it started to rain and did it rain. the AT because of use is a trough and in rain, its a constant stream. We “blue blazed” (a term normally referred to canoeing) our way  for 16 miles Blourb told me for a Navy guy he was impressed. Coming from a former Ranger Commander, that made me feel pretty good. At the shelter which held 12 normally, now fit 30 wall to wall, on the floor, what a fest. We pitched a tent under the outside roof. the kids on the block came out to entertain us. Hey man you smoke(pot)? the kid asked. No, I grew up in the 60s and 70s and never smoked, so no, tonight is not the night to break my streak,” I said. “Right on” he replied. We were in a circle that made us laugh until our sides hurt. We found out a bout calorie blazing, their term for following anyone with extra food or expecting a food drop. lI think they are green blazing, my term for staying put until the pot is all gone then moving one. Some of them have been on the trail 2 weeks longer than me but have taken 9 “0”s. One kid said yesterday he did negative 100 yrds moving from his tent to the shelter.

The next day we were up at dawn and off for another adventure. Standing Bear, TN here we come. 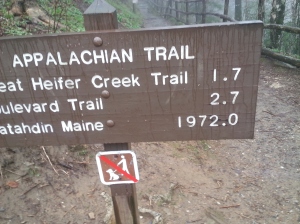