After a quick breakfast of a honey bun and pop tarts so I could keep up with Just Greg, Funk, Beast Bisson, and Weatherman, we were off in grey skys and likely rain.  At one point I got a stone in my shoe so I was left behind. Really bugged me at first cause I always waited to see if everyone was with me when I was in the lead. It was a lesson I learned in the military to take care of those in my charge. I learned it the hard way when at SERE school one of my team went down hard with dehydration and a serious cut.

But I was left on my own for a few hours and well, I liked it. Gone was my nervousness and my fear. It was filled with contentment and time to actually look at something other than the boot ahead of me. I am beginning to think I’m in a pace line on the Tour De France and not hiking my hike.  I met the guys for lunch and we climbed to yet another Shelter where Beast and Weatherman had already staked out the upper deck. I implored the others to surround me to avoid another nocturnal beat down.

An older gent  Trail Blazer, who hiked the AT in 79 and never really grew up was camping there. He started a fire inside the shelter fireplace as it started to rain, then Six Strings, the 18 year old German pulled out his Eukolaly (sp) and began to play as we all fell asleep. It was magical. It got even more magical for Trail Blazer when he lit up a doobie. I  guess its true, if you keep smoking pot nothing every happens to you, nothing. 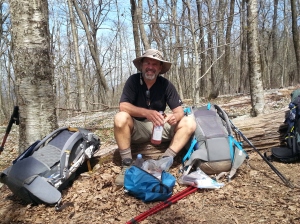 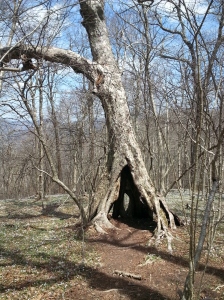 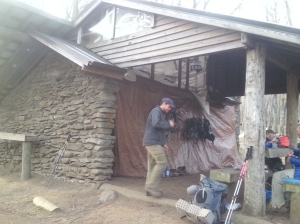 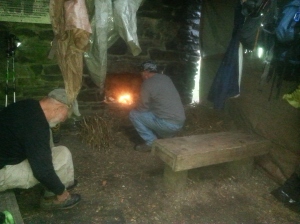 3 thoughts on “MOMMA SAID THERE WOULD BE DAYS LIKE THIS”